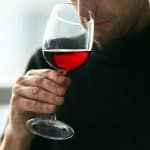 Wine aromas fall into two broad classes: varietal aromas and non-varietal aromas. Varietal aromas are derived from the grape itself, whilst non-varietal aromas are produced by the yeast during fermentation, and have no relationship to the cultivar per se. Thus, all wines made can be classified in terms of the proportion of each class of aroma present, and hence the extent of their varietal character can be evaluated. Given that yeast contribute to a greater or lesser extent to the wine aroma, depending on yeast strain characteristics and grape cultivar, the yeast chosen for the primary fermentation can have a large influence on the amount of varietal expression that any wine exhibits. This article explores some of the differences between yeast and cultivar aromas as pertaining to the final wine aroma, and thus the extent of wine varietal character.

For the purposes of this article varietal aromas are defined as those aromas that are derivatives of the grape only and are perceived in a wine made from that one grape cultivar. Some varietal aromas are well known and have been extensively studied for years, such as the thiols in Sauvignon blanc: 4MSP (boxwood), 3SH (citrus) and 3SHA (passionfruit/tropical). For a discussion of these varietal aroma compounds and how they can be enhanced by yeast choice and fermentation nutrition, see Bowyer et al, 2018. These varietal thiols are not limited only to Sauvignon blanc, however, being also found in lesser amounts other varietals such as Riesling, Colombard, Semillon, Chenin blanc and Gewürtztraminer.

Varietal thiols are expressed by yeast to different extents, depending on the genetic disposition of the yeast strain. Some yeast, such as Excellence FTH, are extremely thiol-expressive, whilst others such as Excellence STR, have lower thiol expression capability. In comparison, Excellence TXL expresses a similar total amount of thiol to Excellence FTH (when considered as aromatic index, defined as the concentration/perception threshold), yet the distribution of those thiols is different between the strains, with FTH producing more of the passionfruit 3SHA thiol. Thus, Sauvignon blanc wines made from these three yeasts will have different levels of both component thiols and total varietal expression (Figure 1). 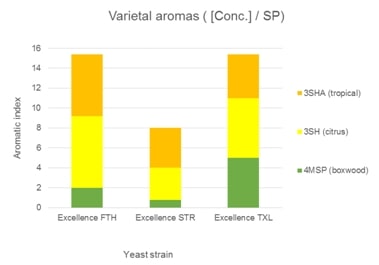 Thiols are particularly sensitive to oxidation, so the preservation of these aromas requires a combination of reductive handling and proactive oxidative protection. Reductive handling is a technique that is familiar to most winemakers. Protection of thiols mandates the presence of an even more powerful anti-oxidant than the thiol itself, typically provided by glutathione-rich nutrients such as Lamothe-Abiet’s Aroma Protect©.

Maximum thiol expression and retention is thus gained by a controlled winemaking sequence:

1. Reductive handling
2. Thiol-expressive yeast (such as Excellence FTH or TXL)
3. Thiol-enhancing nutrition such as Optithiols
4. Thiol preservation using a glutathione-rich nutrient such as Aroma Protect.

Other varietal aromas have been widely studied, such as the terpenes found in Riesling and Gewürtztraminer (amongst others) and the pyrazines found in the Sauvignons. More recently the chemical rotundone was identified in Shiraz (see, for example Wood et al, 2008), and is attributed to the pepper character of cooler-climate wines made from this grape, typified by Shiraz/Syrah from the Grampians, Geelong, Macedon, Adelaide Hills and Hawke’s Bay.

In most of the preceding examples the yeast does contribute metabolically to aromatic expression, such as in thiol release from bound precursors, or the cleavage of a glucose molecule from terpenes. In these cases the resulting molecules are far more volatile than their respective precursors, making the final wine more pungent (Bowyer, 2003). However, these precursors are not found in all grape cultivars, hence their assignment as varietal aromas.

Some grape cultivars may yet have varietal aromatic marker chemicals that are simply not yet known. For the moment, and until such time as they are identified and quantified, some cultivars remain characterised more for their non-varietal wine aromatic composition.

Non-varietal aromas are those that are produced by the yeast used in fermentation that are not derived uniquely from the grape. This type of wine aroma is dominated by the fermentation esters derived from higher alcohols and fatty acids (Bowyer et al, 2018). These compounds tend to have fruity aromas, and extend to florals (Figure 2). 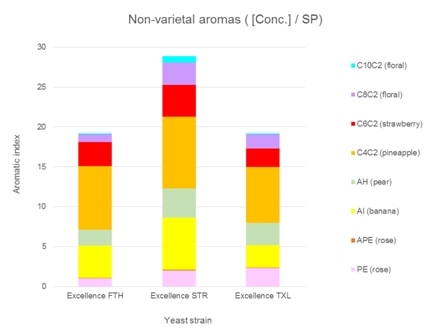 All yeast produce these esters to greater or lesser extents (Soles et al, 1982), and they are present in high levels at the end of fermentation, and so can dominate the nose of a wine. Esters, however, are subject to hydrolysis, over time reverting to their less odiferous precursors, and this is the primary reason why fermentation esters in wine decline relatively rapidly. In wines where the nose is dominated by fermentation esters, total wine aroma can decline significantly over a 6-24 month period. Hydrolysis is accelerated by lower pH and higher temperatures, so if such wines have low pH and suffer warm storage, the situation can progress much more rapidly. Thus, wines that typically have a lower pH, such as Riesling, and that are made with a yeast that produces mainly fermentation esters, are more likely to undergo significant aromatic transformation in the first 1-2 years of life.

There are other non-varietal wine aromas that are not fermentation esters, such as oak compounds (lactones, guaiacol, vanillin, eugenol etc; see, for example, Spillman et al, 1998) and some like furfuryl thiol that are produced by yeast in contact with oak during fermentation (Blanchard etc al, 2001).

The fermentation ester content in a wine can be manipulated through yeast choice (Figure 2) and specific yeast nutrition, with products such as Optiesters©, as discussed previously (Bowyer et al, 2018). For fruit that is lacking in varietal aromatic precursors, perhaps due to over-cropping, an inferior clone or poor growing conditions, an ester-producing strain such as Excellence STR can be a useful winemaking tool, as it produces significantly higher levels of fermentation ester than other strains, as indicated in Figure 3. The combination of a strong ester-producing yeast strain, the use of an ester-enhancing nutrient and cold post-fermentation storage conditions present an ideal winemaking approach in such cases. 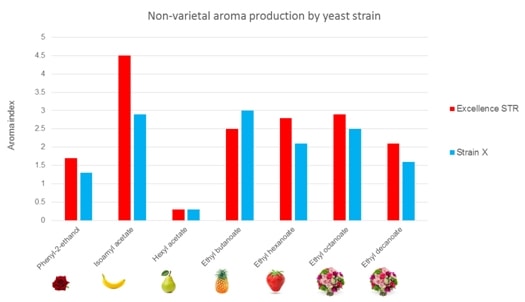 For maximum fermentation ester content in the final wine:

1. Choose an ester-expressive yeast strain (such as Excellence STR)
2. Use an ester-enhancing fermentation nutrient like Optiesters
3. Store the wine at low temperatures.

The grape variety can obviously have a large impact on the resulting aromatic profile of a wine. The different levels of thiols (as well-researched examples of known varietal aroma compounds) versus non-varietal aromas are depicted for several grape varieties (Figure 4). Ugni blanc, although not common in Australia or New Zealand, is included as it makes a notably bland wine – perfect for distillation but for table wine production? Not so much… Sauvignon blanc and Riesling, in contrast, contain high levels of varietal aroma precursors, waiting in the juice in potentia for a suitable yeast strain to express them. Varietals like Semillon, Chenin blanc and Chardonnay are far more susceptible to secondary winemaking influences such as oak and malolactic fermentation because they do not possess high levels of known thiols to contribute to the nose.

Figure 4. The relative varietal and non-varietal aromas produced from different grape varieties, depicted by varietal. Each fermentation was conducted by Excellence TXL under uniform and controlled conditions.

Conversely to profiling wine aroma by grape, the aromatic expression can also be expressed as a function of the aroma compounds individually (Figure 5).

Figure 5. The relative varietal and non-varietal aromas produced from different grape varieties, depicted by aroma compound. Each fermentation was conducted by Excellence TXL under uniform and controlled conditions.

Note that the data presented in Figures 4 and 5 are relative to both the varietal and the yeast strain used for fermentation. A more thiolic yeast strain (such as Excellence FTH) in combination with a grape varietal possessing higher levels of varietal thiol precursors (such as Sauvignon blanc) will yield the most thiol expression in the resulting wine. Conversely, a more ester-expressive yeast strain (like Excellence STR) used on any grape varietal will produce a wine with higher non-varietal ester concentrations.

The total wine aroma profile is given by the summation of the varietal and non-varietal aromas. This is primarily a reflection of both the grape cultivar and the yeast used to ferment the juice, in addition to juice and wine handling techniques. If presented with the yeast characteristics in the manner of Figure 6, and with some knowledge of the varietal aroma characteristics of the cultivar, a winemaker can see instantly what the likely aromatic profile of a wine will be. This is important and valuable information for a winemaker, as wine style is central to brand recognition and sustainability.

Figure 6 also provides an insight into the relative aromatic impacts of thiols and fermentation esters. The lower scale represents the aromatic index of each compound, and the scale is non-linear across the entire aromatic spectrum. Non-varietal aromas can be seen to dominate the aromatic profile of a wine in some cases, at least when the wine is freshly fermented. As noted, over time these compounds will hydrolyse and decline in intensity. In wines with no or minimal varietal character, this will leave them looking flat and dull in due course.

Since we have now established that yeast produce differing levels of varietal and non-varietal aromas, we can use this to evaluate winemaker yeast preference based on a tasting of two Cabernet sauvignon wines made from the same fruit, with the only significant variable being the yeast used for the fermentation. These wines were made in the 2017 vintage from high quality Coonawarra fruit fermented with Excellence XR and the winery’s standard yeast strain (Strain B). Chemical analysis of the wines post-ferment showed no significant differences, and both were placed into hogsheads of the same new oak for maturation.

Both samples were presented blind to winemakers in Mudgee and Margaret River in November 2017 (wines at 7 months of age) and the winemakers asked simply to indicate a preference and provide some comments on the samples. The preference ratios are indicated in Table 1.

Table 1. The preference ratios from winemakers in Margaret River and Mudgee between Cabernet sauvignon made with Excellence XR and Strain B.