Global warming. Always a hot topic(!), one way or another. Whichever side of the fence you sit on, the impacts on modern winemaking are undeniable: lower natural acidity, earlier harvests, and higher potential alcohols. These things can be managed in the vineyard and winery, to greater or lesser extents, but each process comes at a cost. Wine style can also be manipulated through yeast choice (Bowyer et al, 2017) and fermentation nutrition (Bowyer et al, 2018), and research has been conducted in part to seek yeast strains that produce less ethanol (McBryde et al, 2006).

Acid additions not only add to production costs but can also leave the acid structure of the palate unbalanced, and certainly different to the natural acid distribution. Effectiveness of tartaric additions can also vary according to the potassium content of the must. Malic acid has a notable taste of green apple (there’s a reason the Germans call it Apfelsäure) and must be added with this in mind, in addition to its relative microbial instability.

Alcohol can be reduced by dilution, which also lowers the wine flavour, colour and phenolic concentrations, or physical separation processes, which incur a significant financial penalty. As the Beach Boys said, “wouldn’t it be nice” – if we could address these issues in a more natural manner?

Distributed widely in nature, including on grapes, Lachancea thermotolerans (L. thermotolerans; previously known as Kluyveromyces thermotolerans) fits the bill nicely to address both issues in concert. It exhibits strong genetic diversity and has the unusual attribute of metabolising sugars to produce not just ethanol, but also glycerol and, importantly, lactate, the latter due to its unique (for a yeast) possession of lactate dehydrogenase. Upon expulsion from the yeast cell to the must lactate picks up a proton to become L(+)-lactic acid. See Hranilovic et al, 2017 for a detailed study.

There are two significant outcomes from this unusual metabolic behaviour. Firstly, and principally, must pH is naturally lowered through the production of lactic acid, with a concurrent elevation of must titratable acidity. Secondly, the conversion of sugars into ethanol is reduced since other metabolic pathways are utilised, leading to wines of lower alcoholic degree.

L. thermotolerans is a moderate fermenter of must sugar, but typically runs out of steam around 7-9 % alcohol, so it must always be coupled with a Saccharomyces cerevisiae (S. cerevisiae) strain to ensure complete fermentation.

Having targeted this unusual yeast as a potentially useful oenological tool, how do we go about finding the best strain and making it available to winemakers?

In addition to being able to produce lactic acid in reasonable quantities to naturally lower must pH and reduce the must sugar content, the selected strain must also satisfy some fundamental oenological parameters. Chiefly, a selected strain must be sufficiently SO2-resistant, have a short lag phase, not produce undesirable metabolites and be compatible with S. cerevisiae. The compatibility of microorganisms is a characteristic that has been ignored or undervalued in the past but is of paramount importance in situations where multiple organisms are being asked to function in concert. See, for example, Bowyer & Mennesson, 2020.

From a pool of available strains these characteristics were evaluated in laboratory trials commencing in 2018. Strain LT7 was selected from its trial peers not simply for its strong production of lactic acid, for there were other strains producing more lactic acid (Figure 1), but rather for its overarching superiority when all required characteristics were considered holistically. For vintage 2022, this has been commercialised by Lamothe-Abiet as the non-Saccharomyces yeast Excellence® X-FreshTM. 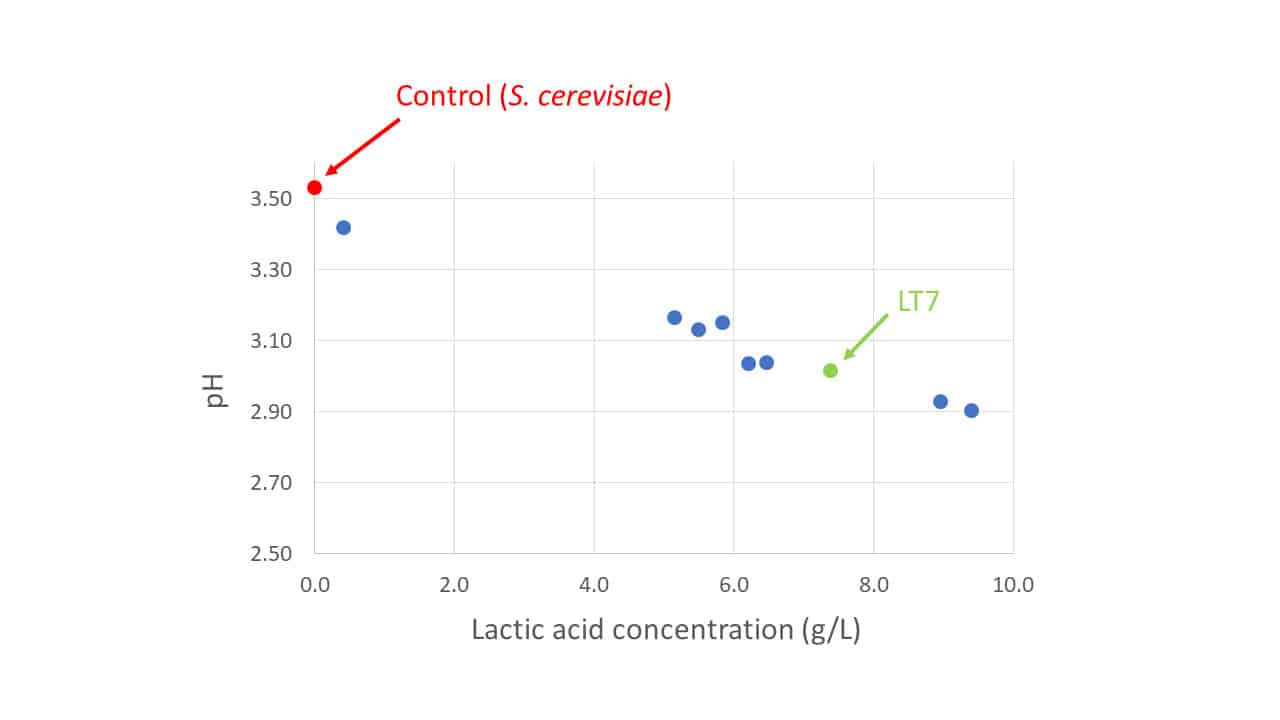 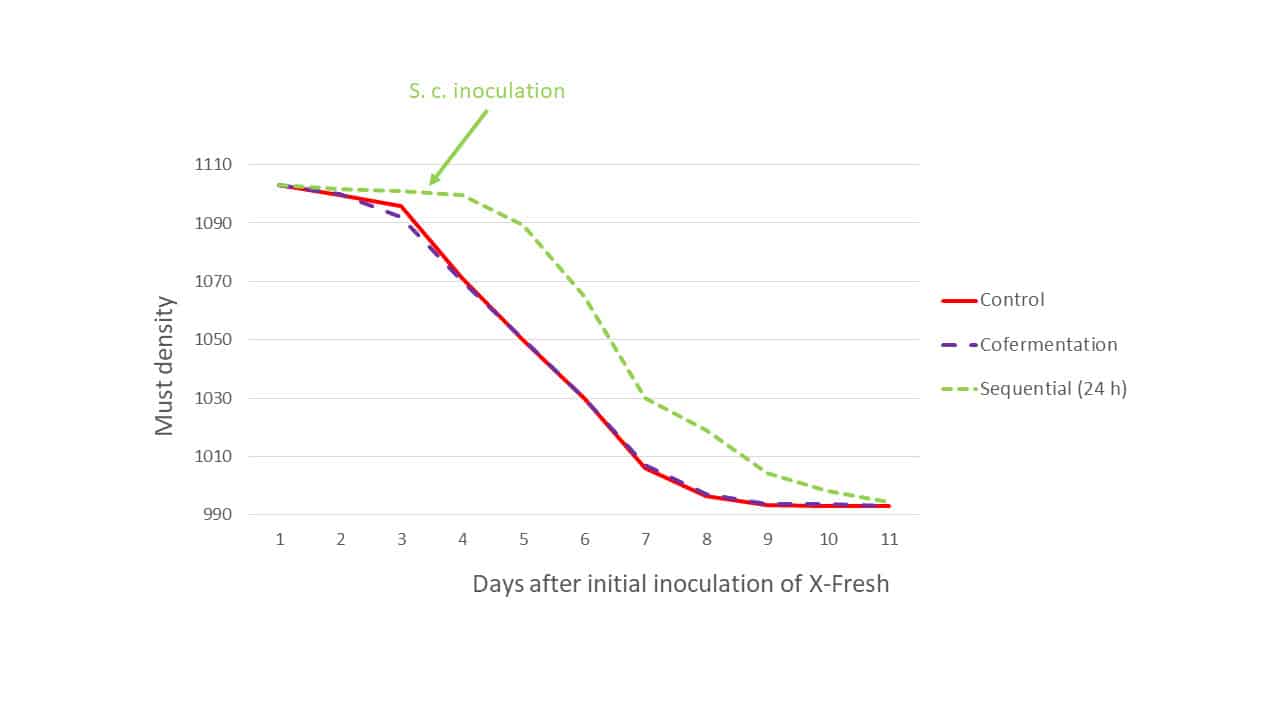 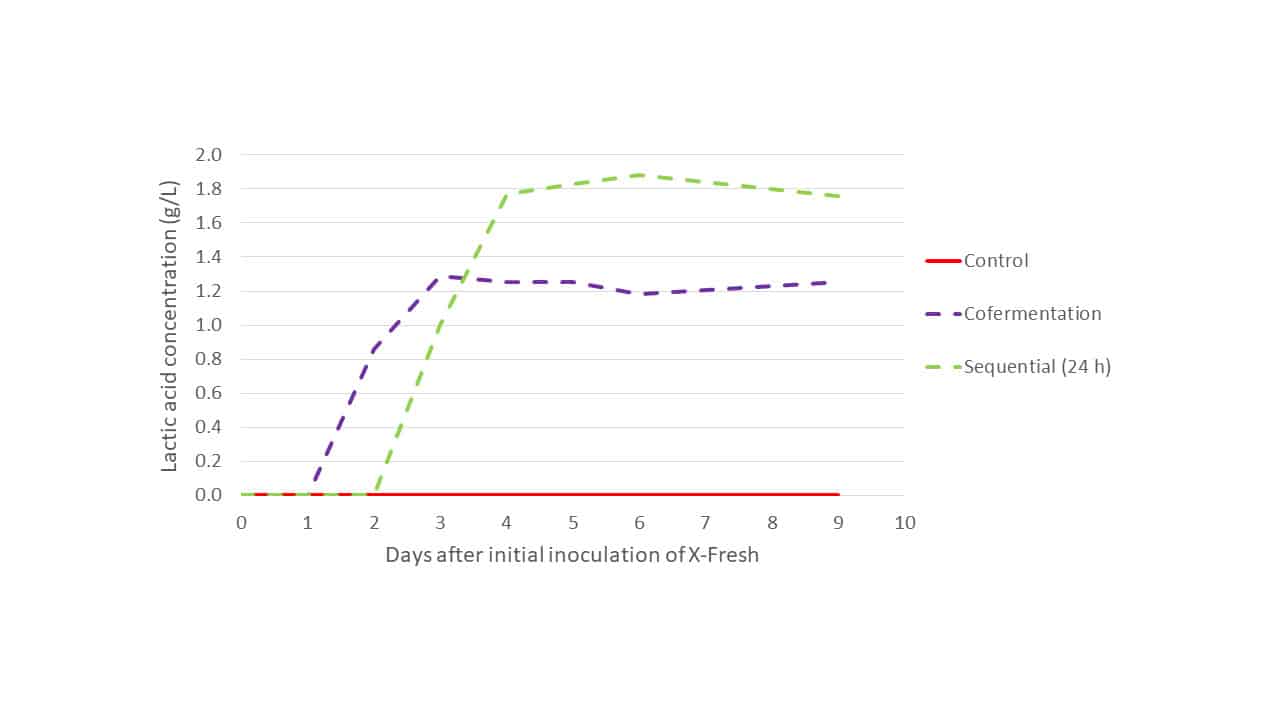 Chemical analyses of the resulting wines (post-MLF) from all modalities yielded expected results when compared with the control fermentation (S. cerevisiae only; Table 1). Points of note here are the lower final alcohol levels of both trial modalities relative to the control, higher TA/lower pH of the treatment wines, and higher lactic acid levels of the treatment wines. Between the treatment modalities, sequential inoculation yielded a lower final alcohol level, lower pH/higher TA and the highest lactic acid concentration relative to cofermentation, which is to be expected as X-Fresh is the unique strain in the must for almost 4 days. Additionally, volatile acidity is typically lower in wines made using X-Fresh, as observed here, perhaps through suppression of indigenous microflora due to the more acidic medium through lactic acid production.

In a separate 2020 trial using Merlot from Margaux (Bordeaux; Trial 2) only the cofermentation modality was compared against a control S. cerevisiae fermentation. Trial 2 inoculation rates were as indicated for Trial 1. Lactic acid production was monitored (Figure 4) and PCR analysis confirmed the presence of L. thermotolerans strain X-Fresh @ 7.9 x 105 cells/mL. 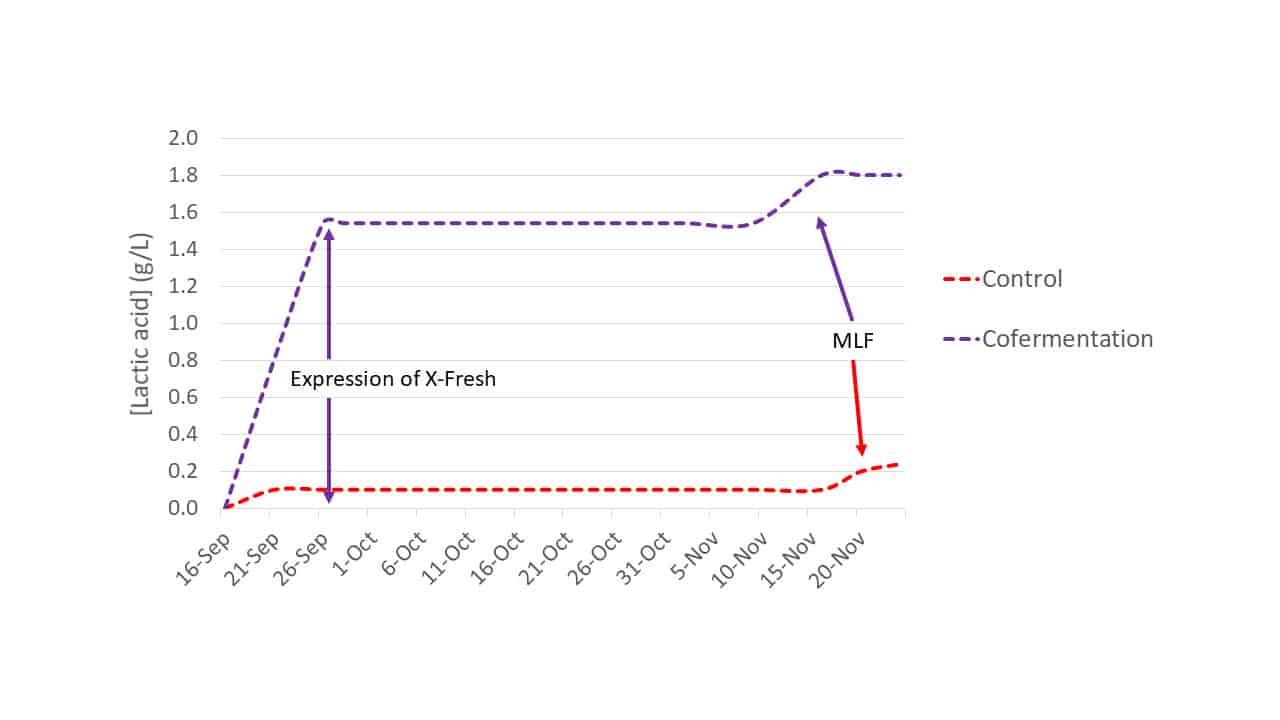 Figure 4: Lactic acid production of Trial 2 fermentations: control (S. cerevisiae only) and cofermentation for L. thermotolerans strain X-Fresh and S. cerevisiae.
Chemical parameters for Trial 2 wines are given in Table 2.

Trial 2 wines were also subjected to sensory analysis (Figure 5). The main points of difference noted between the wines were in the areas of aromatic intensity, palate freshness and palate length, where in each case the cofermentation wine was found to be superior. The control was deemed superior in terms of volume, presumably as a result of its higher pH and lower TA relative to the cofermentation wine. 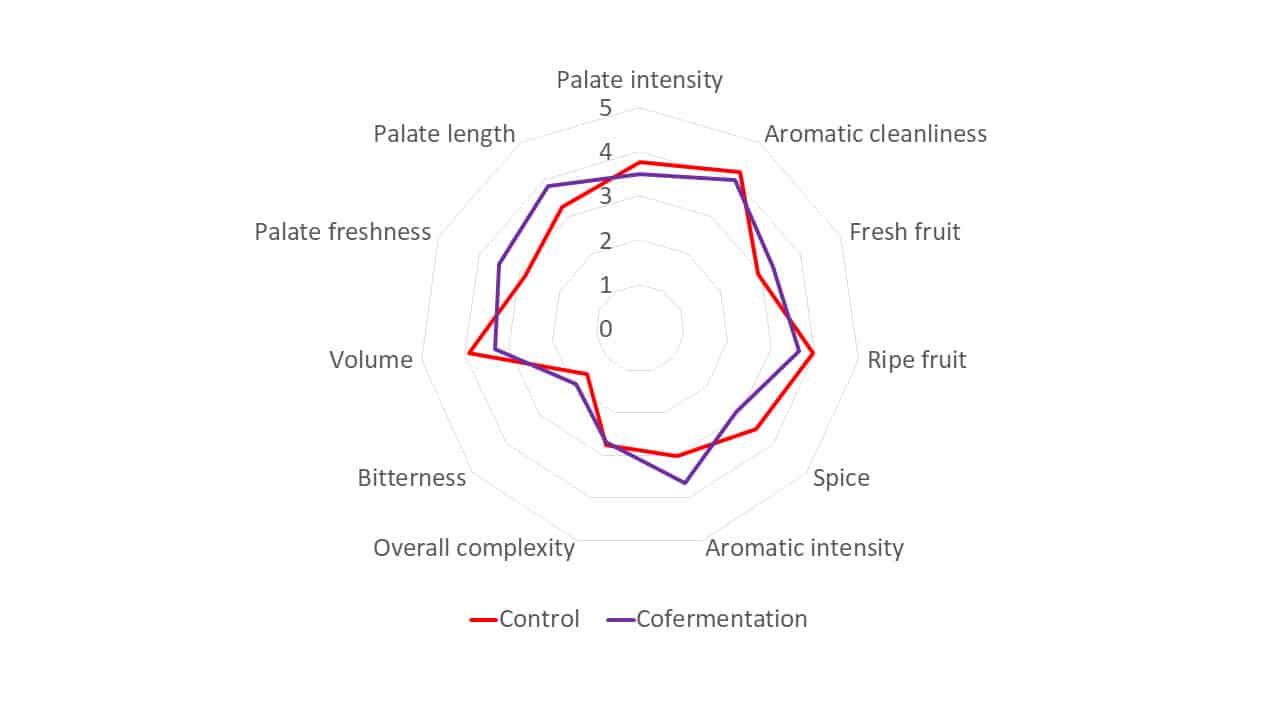 Both sequential and cofermentation can be employed to manipulate the chemical parameters of the resulting wine in a natural manner. Which method, then should be used?

Cofermentation with X-Fresh and S. cerevisiae offers the simplicity of one inoculation procedure, which can be attractive to winemakers that are time-poor or in facilities where process simplicity is desirable. The effects offered by X-Fresh when used in this modality are softer, with less reduction in must sugars, lower production of lactic acid, and a smaller drop in pH and rise in TA.

Sequential fermentation ultimately offers more control of the process, plus the ability to reduce must sugar to a greater extent concurrently with elevating TA and lowering pH to greater extents. The downside of sequential fermentation is that there are two inoculation stages and the initial stage must be monitored closely in preparation for the second inoculation, which of course requires increased cellar resources and tighter controls.

Whether a winemaker seeks to naturally reduce the must sugar content, or to increase the acid content and lower pH, all of these can be achieved by using L. thermotolerans strain X-Fresh in combination with a Saccharomyces strain. Cofermentation offers a simpler procedure with lighter physiochemical impact, whilst sequential fermentation yields a stronger physiochemical impact but requires more cellar attention. Either way, the effects are positive.