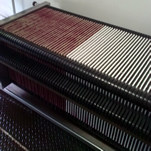 Diatomaceous earth (DE) is inexpensive but performs poorly and is hazardous, with a strong impact on wine flavour and colour.  Most pads are a blend of cellulose and DE (although some pure cellulose pads are available), are relatively inexpensive, yet contain DE, and so some of the problems associated with DE flow into pad usage, such as disposal and organoleptic impact.  Lenticular filters are reformatted pads.  Tangential flow (cross-flow) filtration is a system that can remove particulate, is typically automated, and is best suited to cellar filtration.  Contrary to popular belief, cross-flow filtration is not a sterile process, since it cannot be integrity tested.  Although the utility of cross-flow filtration is very high, it is not a replacement for lenticular filters per se.  Membranes are a form of barrier filtration, typically being made from nylon or polyethersulfone (PES).  They are challenged with miro-organisms to ensure that the required levels of organism removal are met.  Membranes are typically absolute rated, meaning that their filtration efficiency is measurable and stated.  Absolute-rated filtration media are those for which an efficiency of higher than 99.98% is stated, which corresponds to a beta ratio (the ratio of particulates larger than the stated porosity retained on the medium relative to the those that pass through) of 5000:1 or better.

The most recent development in depth media for wine filtration is the 100 % cellulose materials from E. Begerow of Germany (Figure 1; Bowyer, 2012).  The new medium possesses several advantages over standard depth media, such as increased physical strength, increased service life, minimal drip loss, less water required to condition, the ability to steam-sterilise, and no citric rinse requirement.  Since there is no DE in the medium there is minimal possibility of organoleptic impact on the filtrate.  In other areas of food production – for example olive oil filtration – this has been shown to be of great significance, and an additionally an increase of approximately 100 % in terms of throughput (Thomas, 2012) compared with a standard medium was recently observed.

Perhaps the greatest advantage of the pure cellulose medium, however, is in terms of colour adsorption.  The absence of DE substantially reduces pigment adsorption to the medium, which noticeably improves wine visual quality parameters.  This is especially important for wines containing less pigmentation, or where colour (hue) and colour density are deemed important, as they are for most red and rosé wines. 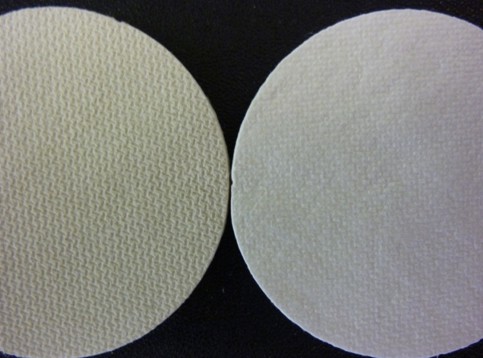 Figure 1: Standard (left) and cellulose (right) depth media.  The beige colouration of the standard medium is due to the presence of diatomaceous earth, which adsorbs colour.

Nylon is a versatile polymer, but one that is not necessarily the best in terms of wine filtration applications, even though it is in widespread use.  The membranes are symmetrical, meaning that they are of approximately uniform density from entry to exit of the medium.  Nylon in its various forms (Figure 2, right) is formed from the reaction of amines and carboxylic acids, the result being a peptide bond like those found in proteins.  In the peptide bond the secondary amino nitrogen is bonded to a hydrogen atom, and due to the difference in electronegativity (Bowyer, 2003) between N and H, bond polarisation occurs, generating a partial positive charge on the hydrogen atom.  This serves as an anchor point for any localisations of negative charge on other molecules as they pass through or come into surface contact with the medium, increasing retention and adsorption of these materials through hydrogen bonding.  This is of particular concern in rosé and red wines, as colour is a key quality parameter (for example, see Francis, 1995), and it is easy to understand that nylon membranes will be inherently colour-retentive. 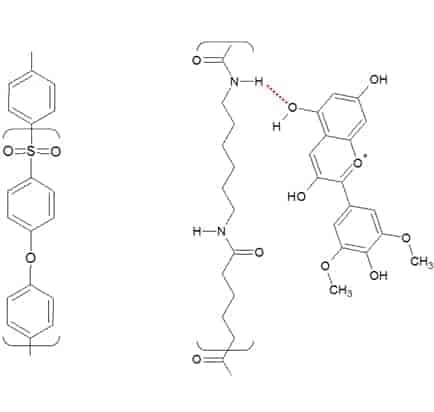 Polyethersulfone (PES) is a newer membrane medium that is becoming more widely accepted due largely to the pioneering efforts of Parker-domnick hunter, who have advocated PES for wine filtration applications since 2000 and do not offer a nylon wine filtration membrane.  PES offers significant advantages in terms of colour retention, physical robustness and flow rates compared with nylon.  The PES polymer (Figure 2, left) critically lacks the ability to hydrogen bond, leading to its almost zero colour adsorption.  PES is typically cast in an asymmetric manner (Figure 3), meaning that the membrane is rather like a thin depth medium, which generates significant benefits in terms of flow rate and loading capacity, both of which are higher than nylon. 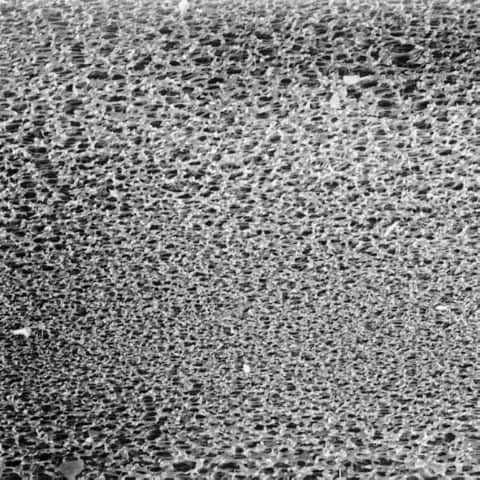 Wine (2012 Malbec) was passed in sequence through a series of filtration media, commencing with coarse grade pad, then tight pad, followed by two 0.45 mm membrane discs.  Commonly, 0.65 mm membrane pre-filters would be used at bottling, however in this study a 0.45 mm disc was used in sequence to illustrate that colour binding, as opposed to particulate retention, was taking place.  The used media are pictured in Figure 4, and the colour binding data are given in Table 1.  A graphical representation of these data is provided in Figure 5. 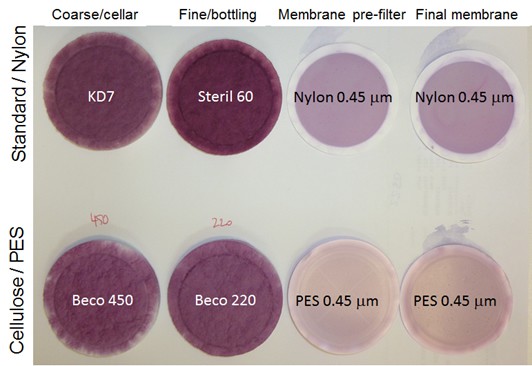 Figure 4: Spent filtration media after passing 100 mL 2012 Malbec in sequence from left to right as pictured for each train. 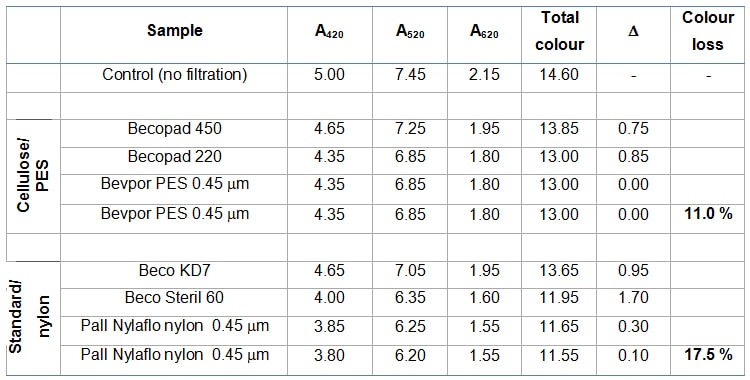 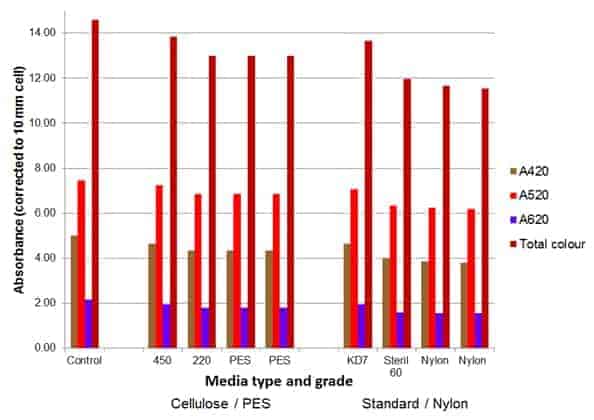 Figure 5: A graphical representation of the data given in Table 2, illustrating the sequential colour loss in a 2012 Malbec as 100 mL are passed through stated media in sequence.

The same methodology was applied to a 2012 rosé, and the data are presented in Table 2 and Figures 6 and 7. 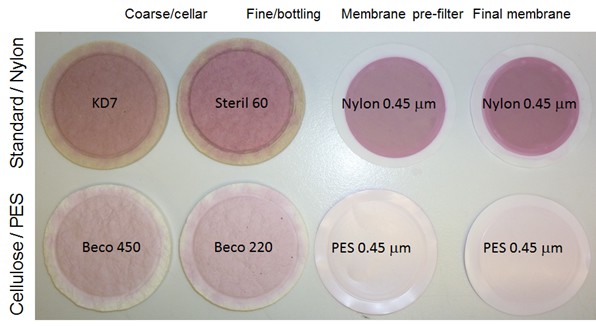 Figure 6: Spent filtration medium after passing 100 mL 2012 rosé in sequence from left to right as pictured. 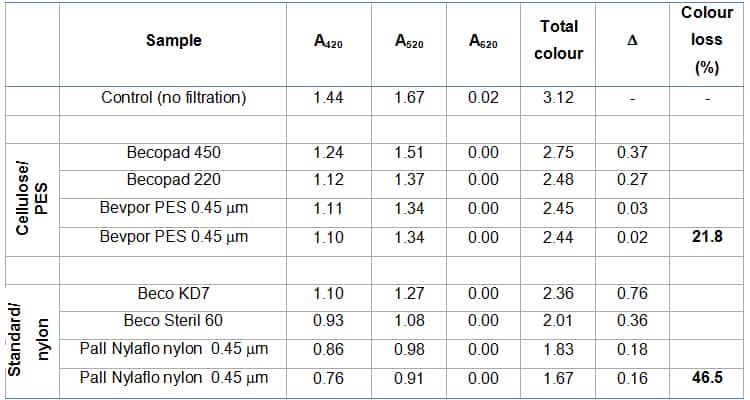 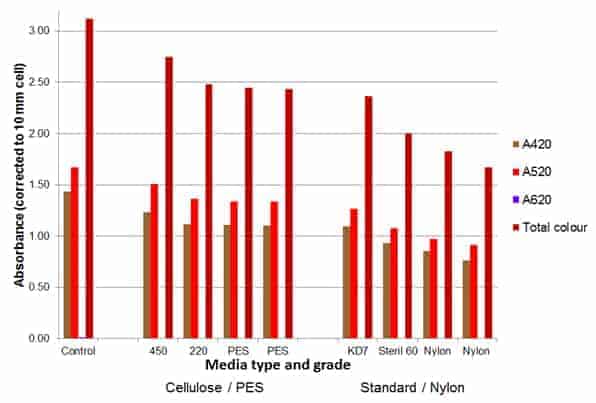 Figure 7: A graphical representation of the data given in Table 3, illustrating the sequential colour loss in a 2012 rosé as 100 mL are passed through stated media in sequence.

We have previously demonstrated that NTU is a poor indictor of wine colloidal loading and capacity to foul filtration media (Bowyer, Edwards and Eyre, 2012), and investigated the potential impact of CMC.  In order to further evaluate the influence of colloidal loading to a wine in terms of impact on wine filterability index (FI), investigations were made with concentrate and exogenous tannin.  A 2011 Shiraz (NTU 0.56, FI = 7.6) was treated with additions of concentrate (equivalent to 4 g/L residual sugar) and exogenous tannin (25 ppm), the sample left overnight and then tested.  The wine returned values of NTU = 1.1 and FI = Fail (> 1000).  FI data recorded for the two samples, pre- and post-addition of tannin and concentrate, are given in Figure 8. 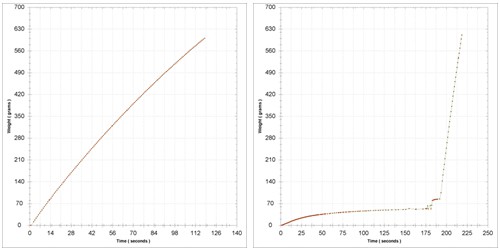 Figure 8: FI graphical real-time plots (mass vs. time) of the initial wine (left) and the wine approximately 12 hours after additions of concentrate and tannin.  The plot on the right was manually interrupted by the operator due to membrane disc blockage during the measurement (FI > 1000), resulting in the sharp mass rise which forces cessation of data collection.

Colour adsorptivity differences between the cellulose depth medium and standard depth medium were obvious, with approximately four times as much colour adsorbed onto the latter using a highly coloured wine.  The nylon membrane medium likewise adsorbed significantly more colour than PES.  In a bottling filtration model, the standard depth/nylon media combination was 60 % more colour retentive than the cellulose depth/PES media combination.  While virtually no colour loss was recorded for the PES membrane passes, the nylon membranes showed sequential colour adsorption with each exposure, which was visually evident (Figure 4).  The fact that both 0.45 mm nylon discs visually appear the same and exhibit very similar quantified colour adsorption indicates that pigmented material is actually being adsorbed and retained as opposed to simply being removed from solution due to large particulate size.  The tight standard depth medium also adsorbed a significant amount of pigment from the wine, observable in the bright red colouration of the corresponding second depth disc (Figure 4).

Colloidal additions to wine have the capacity to impact negatively on filtration media (Czekaj, López & Güell, 2000; Vernhet, Cartalade & Moutounet, 2003; Vernhet, Pellerin, Belleville, Planque & Moutounet, 1999), as evidenced by additions tannin and grape juice concentrate to wines destined for membrane filtration.  Typically colloidal additions do not elevate wine NTU, further emphasising the importance and superior relevance of filterability (FI) measurements as opposed to turbidity (NTU) measurements when additions of this type are to be made.  2011 was a poor vintage in South Australia for some reds.  These wines can prove problematic during bottling due to the presence of glucans released by Botrytis into the fruit.  These polysaccharides are not degraded by pectolytic enzymes and are known to cause membrane fouling, but also have shown themselves capable of fouling depth media as well (Edwards and Eyre, 2013).

Clear differences exist in terms of colour adsorption between the different types of filtration media.  Cellulose depth media out-perform standard depth media in terms of colour adsorptivity, and with respect to membranes PES is seen to be vastly superior to nylon in terms of colour adsorption.  FI has proven to provide a vastly superior estimate of the likely impact of a given wine on filtration media than NTU.  The reliance on NTU as a means of evaluating wine suitability for membrane filtration is likely to lead to significantly higher filtration costs for bottlers due to increased media loading.  Wines containing elevated colloidal levels, or where colloidal additions have been made, can lead to media blockage and higher bottling costs.  The move to mainstream use of filterability determinations as an adjunct to turbidity measurement will service both winemakers and bottlers alike due to the greater understanding of wine filterability provided.

Vernhet, A., Cartalade, D. and Moutounet, M. (2003) Contribution to the understanding of fouling build-up during microfiltration of wines, Journal of Membrane Science, 211, 357-370.