Although in some cases yeast can complete a fermentation with the intrinsic must nutrition available, sometimes it may not. In such cases, the nutrition pool must be supplemented, yet this does not simply mean the ubiquitous DAP addition. Currently, many options exist for winemakers to take advantage of that offer stylistic manipulation on top of their nutrition contributions.

In all considerations of nutrition for both the yeast specifically and the fermentation in general, the best place to start is with some knowledge of the must YAN (Yeast assimilable nitrogen). More and more winemakers are measuring the YAN of juice or must in order to adequately design their fermentation nutrition regime. Rules of thumb:

In all cases, the use of a yeast rehydration nutrient is advisable for reasons explained below.

Yeast rehydration nutrients contain inactivated yeasts, which in turn deliver a mixture of vitamins, minerals, amino acids, lipids and sterols. These are all critical in their own way to yeast fermentation performance. Typically no DAP is present in rehydration nutrients.

In broad terms, the sterols increase ethanol resistance in the yeast cell membrane by improving the membrane’s structural and functional integrities. This has a strong impact on fermentation kinetics, most noticeably in the second half of fermentation, when the ethanol percentage increases. Lipids also improve ethanol tolerance and additionally reduce volatile acidity production. Yeast cells that are weak or suffering diminished nutrition (such as those that are cultured) typically slow down their metabolic activities during the latter phase of fermentation. This is easy to observe in the winery if a controlled experiment is conducted, such as that depicted in Figure 1.

Figure 1: Rehydration nutrient trial from 2016 on Clare Riesling using SIHA 7 yeast both with (blue traces) and without (red traces) SIHA Speedferm. The increased fermentation kinetics with the use of the rehydration nutrient are obvious. Note that the control fermentation was arrested by cooling to preserve some sugar for the final blend.

The vitamins and minerals in rehydration nutrients provide essential enzymatic cofactors for improved aromatic production, general yeast function and aromatically cleaner wines. Care should be taken if any Botrytis or other moulds have been active on the fruit, as in such cases vitamins and minerals will have been depleted. Likewise, if running a yeast culture, it is very important to provide strong levels of rehydration nutrient when the initial culture is being prepared, to attempt to offset the ongoing nutrient reduction that is a consequence of multi-generational yeast division. Failure to do this can yield a culture of relatively weak cells, which can ultimately result in stuck fermentations.

Amino acids are required by yeast for protein synthesis, and must be assimilated early in process once rehydrated, as amino acid uptake is inhibited by the presence of ethanol and ammonium ions. An excess of ammonium ions also leads to increased numbers of yeast cells, which will then require feeding as the fermentation progresses, resulting in a runaway nitrogen demand. A good approach is to only add inorganic nitrogen after the fermentation is underway to avoid biomass escalation.

In-ferment nutrients fall into two general categories: those that contain DAP and those that do not.

Fermentation nutrients containing yeast derivatives and DAP (referred to as “complex nutrients”) are formulated to be broad-spectrum nutrients, and are most widely used by winemakers who seek to minimise their product requirements. Complex nutrients contain levels of DAP that vary according to the manufacturer. Likewise, the composition of the yeast-derived fraction varies between manufacturers. Since DAP is relatively inexpensive, it is useful for the winemaker to know exactly how much DAP is in a complex nutrient. This can vary from low levels to above 60 %, and this is often (but not always) reflected in the price of the nutrient. SIHA Proferm H+2 contains 20% DAP, although not all manufacturers will openly disclose such information.

Fermentation nutrients that contain no DAP, such as Optiflore O, allow the winemaker to avoid the addition of DAP altogether if desired, or at least to make independent additions of the nutrient and DAP according to the requirements of the must. A must with sufficient YAN may not require any DAP supplementation, for example, in which case any nutrient additions can be limited to those containing no DAP. Additionally, Optiflore O provides a detoxification effect due to the yeast hull component, which further improves fermentation kinetics.

The contribution to yeast kinetic performance of a complex nitrogen source, as opposed to inorganic nitrogen (i.e. ammonium ions), is significant. A kinetic comparison between 100 ppm additions of Optiflore O (= 5 ppm N contribution) and DAP (= 20 ppm N contribution) indicates a similar kinetic contribution from each nutrient. The difference between treatments is that the organic nutrients in Optiflore O are consumed more slowly, and there is provision of additional vitamins and minerals that are not found in DAP. Optiflore O also provides nutrition that bacteria can assimilate during malolactic fermentation, unlike DAP.

In recent years significant efforts have been made at developing nutrients that not only contribute to fermentation performance, but also increase the production of specific wine aromatic components. This is particularly relevant for producers of Sauvignon blanc, as this varietal has known and well-studied varietal aromatic marker chemicals, notably 4MSP, 3SH and 3SHA (old nomenclature 4MMP, 3MH and 3MHA respectively). The ability to accurately measure the concentrations of these compounds in a wine permits the refinement of nutrient components for maximum effect.

Wine aromas can be broken down into two broad categories: varietal aromas and fermentation esters. Generally, varietal aromas are derivatives of the grape, whilst fermentation esters are derivatives of the yeast. Each aromatic group can be moderated by yeast choice to some extent, and yeast can be classified according to their relative expressions of varietal and ester compounds (Figure 2, reproduced from and discussed in Bowyer et al, 2017).

Optithiols is a new product from Lamothe-Abiet that strongly elevates thiol production and preservation. It is comprised of specific inactivated yeasts with high concentrations of molecules that both increase thiol expression and protect them once formed through increased wine antioxidant capacity, such as cysteine, homo-cysteine, glycine-cysteine, glutamylcysteine, N-acetylcysteine and glutathione. The exact proportions of these components is specific and strongly relative to product performance. Thiols are easily oxidised, hence a winemaker seeking to produce an aromatic Sauvignon blanc must handle the juice and wine reductively. For maximum effect the juice should be fined with PVPP prior to application to remove oxidisable phenolics.

Thiol production is also relevant to the aromatics of rosé wines. The effect of Optithiols is duplex in nature, as it both increases thiol expression and lowers the production of undesirable sulfur compounds, such as methanethiol, ethanethiol, dimethylsulfide and diethylsulfide.

Through several studies in recent years, Lamothe-Abiet have refined the application of Optithiols for maximum effect. These studies have yielded two critical control factors: dosage and timing.

The effect of Optithiols is very dosage dependant: the more Optithiols used, the stronger the thiol output (Figure 3). Recommended maximum dosage is 300 ppm. 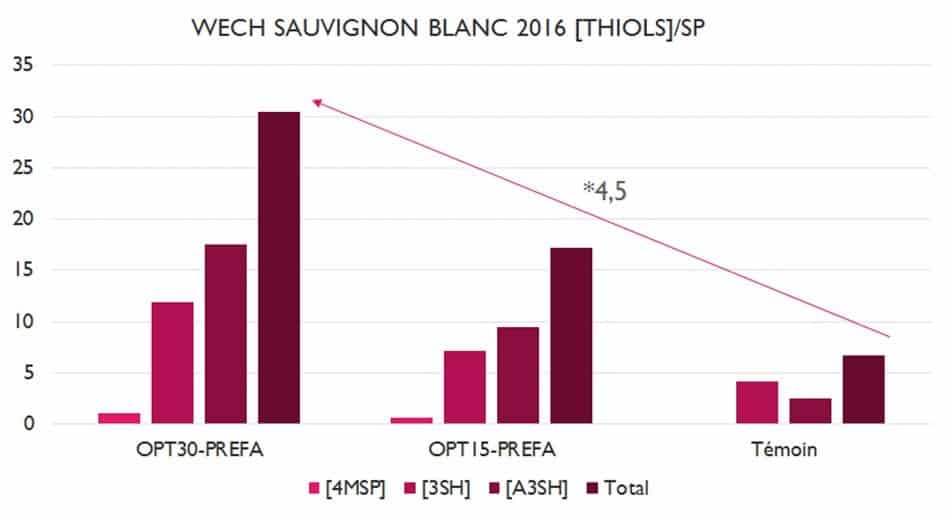 Timing is also of great importance to the use of Optithiols, as can be seen in Figure 4. If added to the juice immediately prior to the yeast, so that the nutrition components are directly available, thiol production is doubled.

Note that Optithiols is only of use for thiolic grape varieties (predominantly Sauvignon blanc and rosé, and to a lesser extent Semillon, Riesling, Chenin blanc and Colombard) in combination with a thiol-expressive yeast.

In certain situations it may be desirable to increase fermentation ester production, such as where increased floral and tropical notes will improve wine quality. In a similar manner in which a specific formulation of yeast nutrients can elevate thiol production in thiolic grape varietals, so too specific nutrients can elevate fermentation ester production. This is of particular use if crop loads are higher and with varietals that contain lower levels of aromatic precursors. 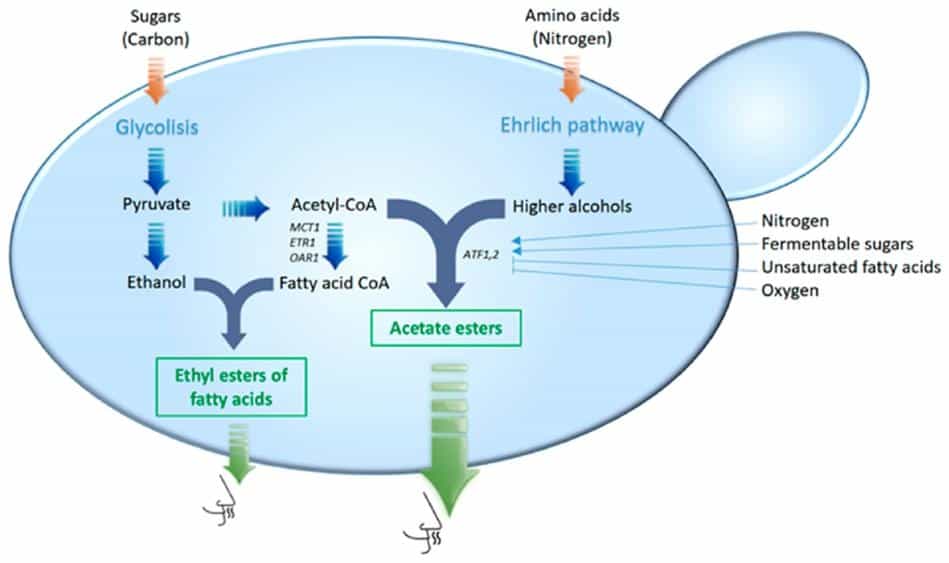 Due to their non-polar structures esters have a strong impact on the nose of a wine (Bowyer, 2003).

The application of Optiesters at 300 ppm in the first third of the fermentation can yield up to a 200 % increase in fermentation ester production, depending on the yeast used and varietal in question. In a trial involving a Shiraz rosé in 2017 using Optithiols and Excellence STR, an ester-producing yeast strain, overall ester production was increased by 61 % relative to the control (also Excellence STR) as measured by ester concentration relative to perception threshold (Figure 6).

Figure 6. Fermentation ester increases measured through the use of Optiesters on a Shiraz rosé in 2017. Both fermentations used the yeast Excellence STR and data are reported as ester concentration relative to perception threshold.

The use of products like SIHA Speedferm and Lamothe’s Oenostim and Optiflore O help a winemaker achieve fermentation goal number 1: complete the fermentation in good time. Beyond this, wine style can be manipulated to a significant extent through a combination of yeast choice and the use specific nutrients like Optithiols and Optiesters. In this way wine quality can be improved through some understanding of how choices in yeast and nutrients can impact wine fermentation kinetics and aromatics, and ultimately wine quality and value.