Although various species of yeast are in use in winemaking these days, both of Saccharomyces and non-Saccharomyces derivation, others differences between strains exists that not all users are aware of. This article compares the differing ways in which a yeast can be commercialised for winemaking use.

Modern winemaking yeast typically falls into one of two categories: isolate or bred. In the former a strain was selected from many occurring in a given environment, such as a vineyard. In the latter case, the yeast was produced in a laboratory under controlled conditions and selected according to specific criteria.

Yeast can reproduce through two distinct mechanisms: asexually or sexually. In the case of asexual reproduction, genetic integrity is maintained since the progeny cells derive their DNA only from a single parent cell. This process is basically the same as taking a cutting from a grapevine: the new plant will be genetically identical to the parent. This also occurs if a yeast if propagated in a juice medium for fermentation, although the inherent depletion of nutrition components, sterols and enzymatic cofactors that occurs during propagation can lead to progeny cells that are weaker in fermentation capacity and intrinsic robustness than the parent cells.

The second mechanism whereby yeast can reproduce is via the sexual method of sporulation. Yeast produce spores under specific conditions, which can combine with spores from another strain to give rise to genetically diverse progeny strains. It is this breeding process that is used in a laboratory to generate new commercial wine yeast.

Direct breeding of yeast is relatively straightforward: two yeast strains are encouraged to sporulate through manipulation of their physical environment. Spores from each parent strain are selected and crossed using a micromanipulator in order to generate a spectrum of F1 hybrids. These strains of mixed genetics are then examined phenotypically to choose the best of the progeny strains according to defined criteria, such as VA/H2S/SO2 production, aromatic profiling, fermentation kinetics and alcohol tolerance. In essence this is not dissimilar to the breeding of racehorses, where mare and stallion are crossed and the best of the offspring destined for the racetrack. In isolate yeast strains this breeding is randomised in nature, but in direct breeding it is assigned vectors. To reuse the racehorse analogy, in the breeding technique the best mare and stallion are mated in isolation according to the desired characteristics of the offspring, rather than allowing a paddock full of males and females to go at it.

Back-crossing is a variation on direct breeding of yeast, and is used to produce yeast that closely mimic the characteristics of one of the parent strains whilst alleviating the shortcomings of that same parent, through the introduction of some desired genetically-derived attributes of the second parent strain.

For example, an isolate yeast might produce exceptional wines in terms of all organoleptic characteristics but carry the limitation of poor alcohol tolerance. The application of the back-cross breeding technique can be used to ameliorate this shortcoming, whilst maintaining the positive attributes of the desirable parent into the progeny strains. This is achieved through an initial direct breeding of desirable (but alcohol intolerant) parent A with the new strain parent B (which is more alcohol tolerant). From the progeny strains of this first crossing, those carrying the desired alleles of parent B pertaining to increased alcohol tolerance are selected, after which the best candidate is subsequently back-crossed with parent A. This process is repeated and in each generation progeny strains are selected that also carry the desired allele of parent B. With each subsequent back-cross the genetic composition of the progeny more closely mirrors that of parent A. After 5 cycles of back-crossing, the genetic similarity of the resultant progeny strain to Parent A is very high. The result of this is that the final strain produces wines that are organoleptically similar to desirable Parent A, but with the now intrinsic alcohol tolerance of Parent B (Figure 1). 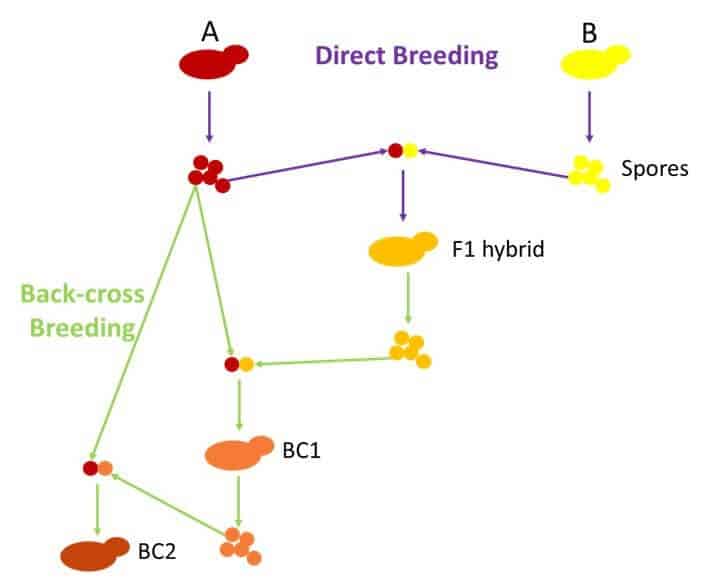 It is important to note that this is not genetic modification. Yeast produced through breeding techniques are no different to isolates. It is simply that the crossing of parents in such strains is performed in a directed manner in a laboratory, rather than in a random manner in a vineyard.

So the question remains: why breed rather than isolate yeast? The answer lies in the predictability and control offered by breeding techniques, and also the speed through which new strains can be developed compared with randomised isolation.

Bred yeast strains are selected to offer the security of rapid must implantation and defined fermentation kinetics. Characteristics such as the production of volatile acids, H2S, SO2 and ethanol conversion efficiency can be selected for in advance, rather than having to tolerate some of these attributes in an isolate (see, for example, Marullo et al, 2006). From an organoleptic perspective, strains can be selected for elevated varietal aromatic expression and polysaccharide production for mouthfeel. More rigidly defined genetic characteristics can also be selected for with yeast breeding, which can in turn allow wine stylistic manipulation through yeast choice and blending, as in the following case studies.

An active yeast breeding and selection programme continues at the University of Bordeaux. One recent objective was to increase the winemaker’s choice for aromatic white wine fermentation. To that end, three separate yeast strains derived from breeding were commercialised to service different production requirements:

All three of these hybrid strains have particular characteristics derived from their genetic dispositions. Excellence STR, for example, is a POF(-) strain, which is a reference to its lack of the enzyme cinnamyl decarboxylase. All winemaking yeast have this enzyme, some in larger quantities than others, which allows the yeast to expel CO2 from cinnamic acids to thus generate vinyl phenols. Vinyl phenols are both aromatic suppressants and substrates for Brettanomyces to produce 4EP and 4EG, the “Brett” marker chemicals, through further metabolism.

Excellence TXL is also POF(-), but it also has some other tricks up its genetic sleeve. The protein ure2 (governed by gene URE2) regulates the inhibition of the transcription of genes required for the metabolism of complex nitrogen sources during fermentation (Dufour et al, 2013). Since Excellence TXL is URE2(-), it is able to metabolise these more complex forms of organic nitrogen even in the presence of high levels of inorganic nitrogen (e.g. DAP), and so produce wines with higher thiol content in nitrogen-rich fermentations. Additionally, Excellence TXL is classified SSUR-1(+), meaning that it exhibits resistance to sulphites for increased implantation success, a shorter lag phase and more rapid commencement of fermentation.

In winemaking terms, this translates to a selection of yeast with different genetic and (therefore) organoleptic characteristics that can be used by the winemaker to more accurately control both a wine’s fermentation process and stylistic qualities. For example, when the varietal thiol and fermentation esters are quantified between Excellence FTH, TXL and STR the data obtained are illustrated in Figure 2. A winemaker may thus choose which yeast will work best on which parcel of fruit according to production requirements, desired organoleptic outcomes and blending options, all as a result of genetically-based yeast strain selection. In practical terms, someone seeking thiol production as a priority would be best to use Excellence FTH, whilst someone wishing to impart a combination of thiol expression and mouthfeel would do better to use Excellence TXL. Winemakers wanting to make a less varietal “fruit-bomb” would receive strong results from the use of Excellence STR, due to its combination of thiol expression and strong fermentation ester production. The wine aromatic and textural characteristics can thus be manipulated in part simply by yeast choice, which have their origins in a laboratory-based yeast breeding programme. In this way winemaking control and choice are increased.

Figure 2. Aroma production expressed as the aromatic index (i.e. relative to perception threshold for that aroma in each case) in Sauvignon blanc between the yeast strains Excellence FTH, TXL and STR.

Lamothe-Abiet’s Excellence XR was one of the first hybrid strains to be commercialised from the yeast breeding program at the University of Bordeaux. It is an F1 hybrid that was selected for minimal production of VA, fermentation esters and MLF-inhibitory fatty acids (FA). It was also selected for strong polysaccharide production, which are liberated through rapid lees autolysis. These characteristics combine to deliver wines of strong typicity and full mouthfeel, a result of which is that Excellence XR is one of the dominant yeast strains used in the greater Bordeaux area. This is understandable in a wine region that is strongly focused on terroir.

In comparison, Excellence DS is a back-cross hybrid that was selected along similar lines but rather to produce more fermentation ester (for increased fruitiness), without the emphasis on polysaccharide production (for more linear tannin perception), and for increased colour delivery and stability. Consequently, the tannin delivery in wines made with Excellence DS differs notably from that of Excellence XR in terms of physical perception and length.

The differences between yeast in terms of wine impact can be mapped during a structured tasting, as indicated in Figure 3. This same wine pairing was shown to many Australian winemakers prior to vintage 2017, with 73 % of winemakers rating the wine made with Excellence XR as having higher volume in-mouth than the wine made with Excellence DS, due to its polysaccharide production. 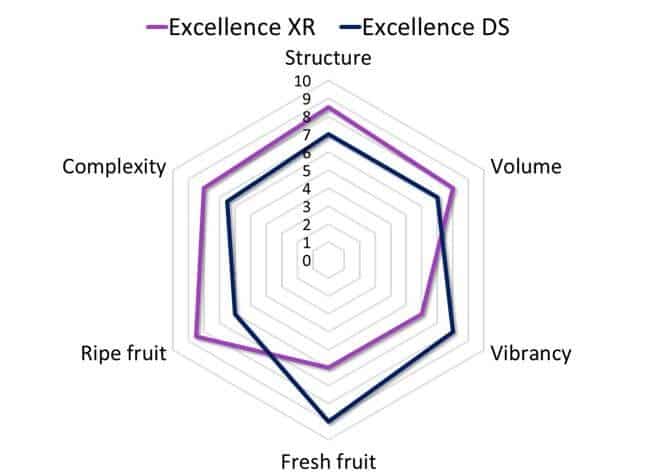 Figure 3. Organoleptic mapping of trial wines made with two different yeast strains, Excellence XR and Excellence DS. The wine used was a 2015 Merlot from Pessac-Léognan made in an experimental winery under controlled conditions, where the only variable was the yeast.

Two key considerations with the selection of red wine yeast are ethanol tolerance and fatty acid production, to ensure successful primary and secondary fermentations respectively. In Australian wines wine alcohol levels have risen significantly in recent years (Godden et al, 2015), and since yeast generate increased levels of MLF-inhibiting fatty acids in response to stress, it is important that new red yeast strains are tolerant of high ethanol concentrations. Most modern yeast strains are selected to comply with this change, and so are typically tolerant of alcohol levels over 15 % (v/v). 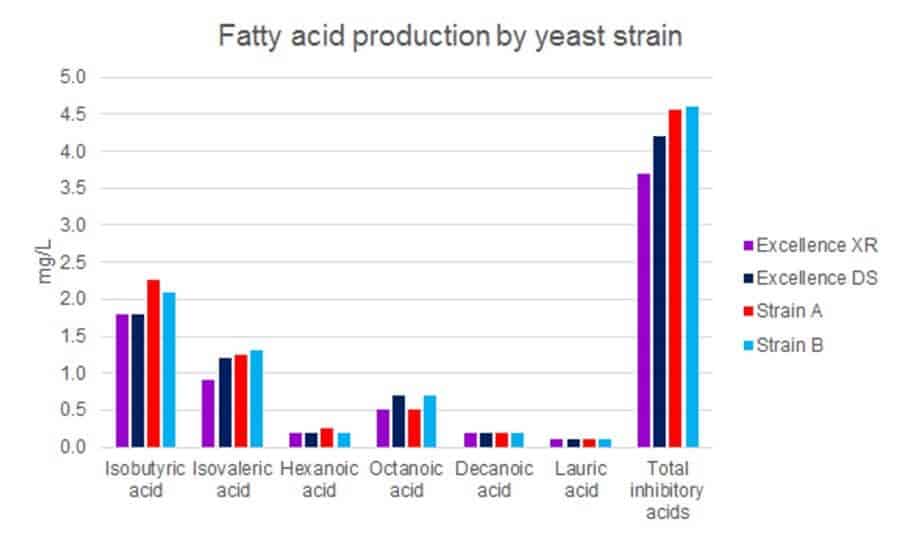 The choice of fermentation yeast for winemakers continues to expand, through either the isolation of yeast from specific terroirs or breeding techniques employed in dedicated laboratories. Each approach to yeast commercialisation represents a valid methodology, but only yeast breeding allows the sequential refinement of yeast genetics and subsequent wine characteristics to a high level. Ultimately, the choice is that of the winemaker, who benefits in either case.