The varietal aromas of Sauvignon blanc are well known and have been extensively studied for years: 4MSP (boxwood), 3SH (citrus) and 3SHA (passionfruit/tropical) (Figure 1). For a discussion of these varietal aroma compounds and how they can be enhanced by yeast choice and fermentation nutrition, see Bowyer et al, 2018b. These varietal thiols are not limited only to Sauvignon blanc, however, being also found in lesser amounts other varietals such as Riesling, Colombard, Semillon, Chenin blanc and Gewürtztraminer.

Figure 1. The varietal aroma compounds found in Sauvignon blanc, and other grape varietals. Sensory thresholds are indicated in ng/L, along with indicative aromas.

Varietal thiols are expressed by yeast during fermentation to different extents, depending on the genetic disposition of the yeast strain, specifically pertaining to the amount of carbon-sulfide lyase that they produce. Thiols are present in the grape as cysteinylated derivatives (Tominaga et al., 1998). Thiol-expressive yeast are those that have the enzymatic capacity to cleave the cysteine portion of the precursor and so liberate the aromatic thiol (Figure 2). Some yeast, such as Excellence FTH, are extremely thiol-expressive, whilst others such as Excellence STR, have lower thiol expression capability but higher fermentation ester production. 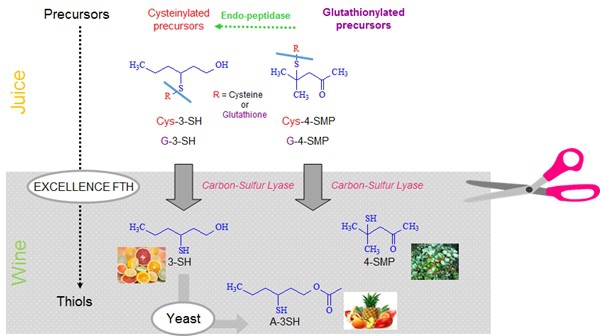 Certain factors are known to favour thiol precursor accumulation in grapes, such as vineyard water availability and nitrogen application, and even the foliar application of nitrogen. Once harvested, juice thiol content can be increased by using an enzyme with cellulase activity prior to pressing off, and some extended contact of the juice and lees will further increase thiolic precursor concentration. Oxidised polyphenols should be eliminated with PVPP application, and maximum thiol production occurs at slightly warmer fermentation temperatures than we typically see in Australia (around 18 °C).

Interestingly, the amount of cysteinylated thiol precursor actually converted into a free thiol is typically low, of the order of 10 %. In effect, most Sauvignon blanc wines have vast reserves of untapped and involatile thiol latent in the wine. So how can a winemaker access this aromatic reserve? Enter Oenozym TH.

This is a new product on the Australian market specifically aimed at increasing the volatile thiol (varietal) aromas in Sauvignon blanc. It is a purified liquid pectolytic enzyme formulation with very useful side activities. Non-purified enzymes contain undesirable side activities such as cinnamyl esterase, which leads to vinyl phenol production, suppressing fruity aromatics and increasing Brettanomyces risk. In the case of Oenozym TH, it is purified of cinnamyl esterase and the residual side enzymatic activities serve to increase thiol release.

Oenozym TH can be used in two ways: during alcoholic fermentation (AF) or during maturation. These applications yield different results in terms of thiol expression due to the ways in which the individual thiols are produced. If Oenozym TH is used before or during AF, an increase in thiol expression is observed for all three thiols 4MSP, 3SH and 3SHA (Figure 3). In this example, overall thiol concertation was increased by 49 % by using Oenozym TH. Interestingly, 3SHA and 4MSP were only observed in the treated wine, being absent in the control, due to the enhanced expression of the aromatic precursors afforded by Oenozym TH. 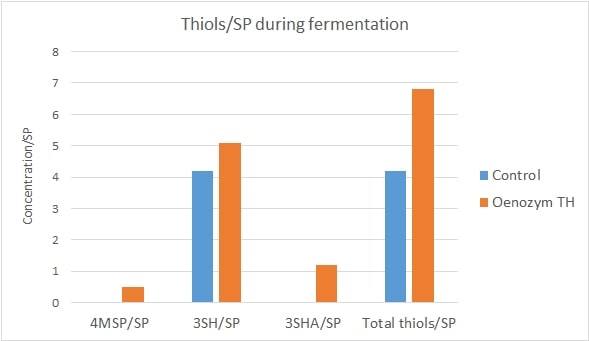 If Oenozym TH is used post-AF, only the hyper-expression of 4MSP and 3SH is observed, as 3SHA is only formed in the presence of actively fermenting yeast. This is depicted in Figure 4, where overall thiol concertation is increased by 24 %. Note that in Figure 4 the concentration of 3SHA does not increase, as no yeast is present during maturation to esterify the 3SH precursor to its acetate 3SHA.

Maximum effect of thiol increase would be observed if Oenozym TH was applied during both AF and post-AF. Additionally, wine style can be altered slightly, if the winemaker desires, by choosing the time of enzyme application, in that a more citrus-style wine will result if the application is only post-AF. 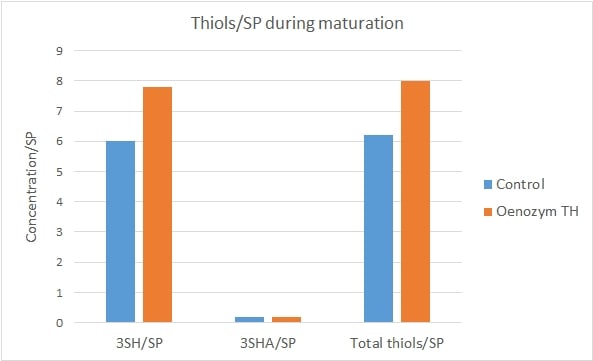 Further, if a winemaker finds a Sauvignon blanc aromatically lacking prior to bottling, Oenozym TH can be used a few weeks prior to bottling to increase thiol release. Note that if using CMC it is advisable to conduct stability testing if any enzyme is being used prior to bottling.

Previously, we have indicated a simple recipe to maximise thiol expression in Sauvignon blanc (Bowyer et al., 2018a). We can now add Oenozym TH to this winemaking toolbox. Maximum thiol expression and retention is gained by a controlled winemaking sequence:

1. Reductive handling
2. Hyper-thiol release through Oenozym TH application on the juice, some skin maceration and lees contact during cold settling.
3. Thiol-expressive yeast (such as Excellence FTH or TXL)
4. Thiol-enhancing nutrition such as Optithiols, added just before the yeast.
5. Thiol preservation using a glutathione-rich nutrient such as Aroma Protect, added in the last third of fermentation.