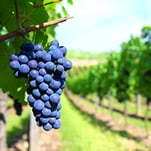 The 2015 vintage presented a mixed bag, with some areas experiencing a cool wet vintage, others a very dry but temperate growing season. Acids were commonly higher than expected, with the cooler conditions elevating malic acid levels in the fruit. Some difficult fermentations have been seen, and very low YANs reported in some areas. Quality appears variable, with some red fruit coming in high in sugar but exhibiting low phenolic maturity.

We have witnessed a superb vintage. A lack of long heat waves, combined with a very early on-set of Autumnal weather patterns has helped extend fruit development. With a very early and compact harvest, there was high potential for fruit being hung out in a blistering heat wave. Rain events in early February helped pull back sugar levels, which were well ahead of phenological ripeness, and in some regions caused some small issues with powdery mildew and botrytis. The mild, drawn-out ripening season has seen some later varieties, particularly Bordelaise look absolutely stunning. A strong vintage for Chardonnay and Pinot but I think it will be an excellent Cabernet year. Stock up on Mount Mary, Wantirna Estate and Yeringberg when they are released. – Luke Houlihan

2015 has provided us with an interesting vintage in South Australia. In some ways it has been similar to the blistering 2008, minus the heat events. The Bureau of Meteorology tells us that it has been a warmer summer than average, but we have not had those long heat waves seen in past summers. Combined with low rainfall over the growing season, this has led to sugar accumulation advancing over phenolic ripeness. For regions like the Riverland with ready water access, irrigation was able to offset this, but even with irrigation high sugars have been reported in some regions.

Soil moisture monitoring has shown a decline in soil moisture content over the growing season, including several regions where irrigation is in place. Yields in some areas have been as low as 60% of normal, with few vineyards producing a normal crop.

Seemingly a reflection of the stressful growing season, YAN has been reported to be very low in general, with some fruit below 50 ppm. Savvy winemakers have adjusted for this using a proactive process, incorporating a strong nutrient regime in ferments.  Most important in view of the high sugar concentrations is a rehydration nutrient such as SIHA Speedferm, which has sold exceptionally well this year. In-fermentation nutrition with products like SIHA Proferm H+2 has been important, and with some ferments lagging, a no-DAP nutrient such as SIHA Proferm Fit for the end of fermentation has proven invaluable.

Strong yeast performances this year from SIHA 10, SIHA 8, and SIHA 7. Cryarome, Whitearome, and Varioferm have maintained momentum despite the lower fruit yields.  SIHAZYM enzymes are working well in flotation applications, yielding solids down to 2 %. – Paul Bowyer

It has been a low yielding year, with some vineyards 40% or more down on expectations, mostly due to poor fruit set and high bird pressure. Winemakers are saying that quality has been very good, just not much of it. Many wineries didn’t run night shift this year due to lack of tonnes. This vintage will have significant impact on those operations struggling to stay afloat. Despite the low yields it was a protracted vintage, due to two significant rain events, which slowed ripening and increased disease pressure on varieties like Shiraz. There were some localised botrytis infections, and fruit from the Pemberton region has been highly affected by smoke taint. Margaret River also has a couple of localised issues. High alcohol again this year. – Steve Brunato

Mudgee experienced a solid, albeit slightly early vintage. In the cooler Orange region the warm Spring set things in motion early and a moderate summer led to early ripening and a more leisurely harvest. Some uneven ripening was evident in the Hunter Valley due to rain events, leading to harvest dates somewhat behind last year for several growers, although some reds were picked earlier than last year – a mixed bag. – Paul Bowyer

What should I be doing now?

Winemakers who have unused SIHA products are advised to keep yeast cool and dry. Opened packets should be discarded. Enzymes and nutrients need only be kept dry. Bentonite, which is in demand at present, must be kept sealed, dry and away from undesirable odours, as its adsorptive nature means it can transfer these characteristics to wine when applied.

For those winemakers yet to protein stabilise their whites, if you value your wine consider using SIHA Active G. Its superior compaction provides much greater wine return off lees than sodium bentonites, meaning more wine in the bottle. Typical addition rates are around twice that of sodium bentonites, but it is easier to handle, quick to rehydrate, and settles more rapidly than anything else. It is the most strongly compacting bentonite on the market, and that means more money in your pocket.

Get the most out of your reds with a maceration enzyme

If you don’t already, consider using a maceration enzyme like SIHAZYM Extro on your red fruit at the crusher in future.

Many people push the line that this is to increase tannin and colour extraction, and although these characteristics will increase somewhat over a control, the main advantage of red enzyme addition is in fruit expression and lees settling and racking. As in white juice, the enzyme will break down pectins, allowing lees components to settle more cleanly and rapidly, which in turn leads to better fruit expression and cleaner rackings. Likewise, the wine filterability will increase significantly on enzyme application.

Some red wines fail filterability testing when ready for bottle through the presence of pectins, and to rectify this in a finished wine is more expensive, time consuming, and troublesome than in a must, so it’s best to add at the crusher and gain the benefits of fruit extraction and expression as well. If not removed, pectins can foul a membrane. Note that best results are obtained by using purified enzymes, to maximise fruit expression and minimise Brettanomyces risk.